This month a pipe which collectors in Holland refer to as a 'pipe with 'pearled joints', this because of the pearl type decorations that are line the joints or mould seams. It was made in Gouda between 1715 and 1730 and was also found locally. These type of pipes often have nicely decorated bowls which depict daily life scenes, objects, people and animals. These type of pipes are highly popular with collectors and they will have similarly created interest with pipe smokers during the times they were made.

These 'pearly joint' pipes generally belong to the category of the cheapest pipes: cheap because the minimal amounts of finishing were needed. Because of the pearl joints there was no need or possibility to smoothen the joints, and the decorations on the bowl took away the need for smoothing or 'shining'.

In many cases the bowl's rim was not smoothened either. This all meant less finishing touches, and therefore lower cost production, while the decorations offered an extra appeal to the smoker.

The stems of this category of 'simple' pipes was often not more then approx. 20 cm.

Charlie Chaplin was born in 1889 in London, and passed away in Switzerland in 1977. He was one of the most important comics during the 20th century, and starred in many movies. His best known role was that of the hobo 'The Tramp', een short man of common descent, with a little moustache and a large self esteem. With his tight jacket, a rotan cane and his characteristic round hat, he managed to deal with daily life and survive all sorts of difficulties and challenges from his underdog position.

The pipe featured is an American product from an unknown maker. It depicts Charlie Chaplin remarkably well and is a very interesting memory to the beloved Charlie Chaplin.

The smoking characteristics on the other hand are quite poor, the hole in the back was used to fit in a wooden stem, creating a very unstable construction. Most likely this pipe was mainly served the purpose of a souvenir. It measures 7,5 cm in height. 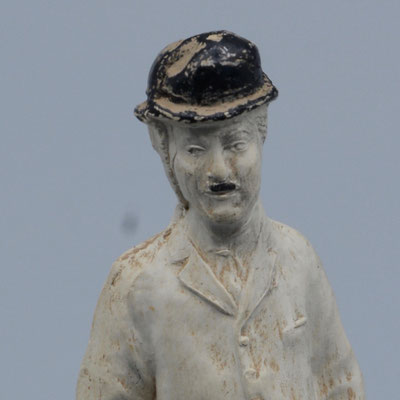 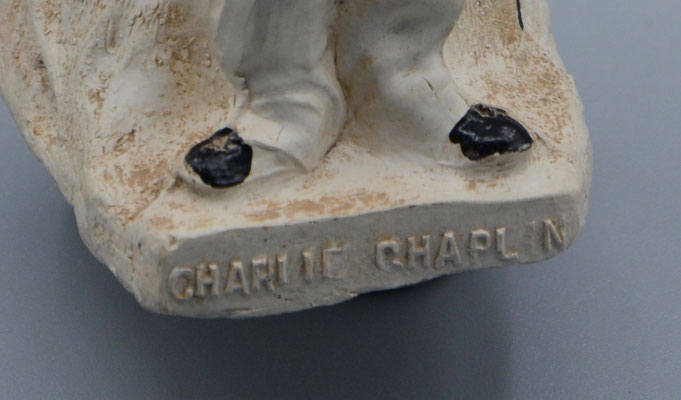 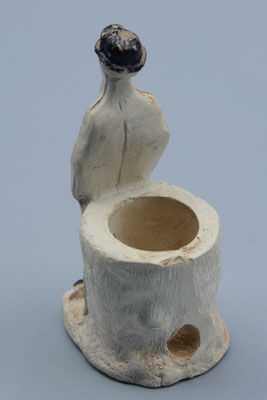 Pipe of the Month February 2020

This month we feature a pipe from the western grass lands of Kameroen in West Africa, one that is typical for a large ethnic group called the Bamum that traditionally lives in this area. Many of the Bamum live in the Noun department with it's capitol Foumban. The Bamum are part of the ethnic Bantu.

The soil in the area around Foumban is very rich of a clay which is very useful for pottery and pipes. The women are the ones that make the pottery while the manufacturing of pipes is restricted to the men.

The pipe shows three different figurals. Two are human faces and the third in the middle is the head of a buffalo. This buffalo represents the almost supernatural powers of the so called Fon, the local king.

At the bottom of the bowl we can see a piece of cloth plugged in a hole. This hole served the purpose of dispensing the fluids that are created when smoking tobacco. The piece of cloth probably serves to prevent air coming in while smoking. The height of the bowl measures 13 cm.

This pipe can be dated to the middle of the 20th century.

Pipe of the Month January 2020

This month's featured pipe is possibly made in the city of Haarlem. It's not always obvious to link a pipe to a specific production centre, especially when the location where the pipe was found does not offer any comparable reference. This is the case with this months pipe, which was found in the city of Amsterdam.

This pipe can be dated at the end of the 17th century. Clearly not typical to Gouda. The decorations however, do resemble the ones that are known from the city of Leiden. Pipe manufacturing in Leiden however was basically at it's end during the period that this pipe was made.

The decoration might provide us with a clue. One side of the bowl shows a flower (a tulip ?!) and the other shows the coat of arms of the city of Haarlem. The most plausible explanation therefor seems to be that this product was made in Haarlem.